Then it was tryst with “Lessons from Science”; understanding of solar system, suns, stars, planets, constellations and milky ways. I understood those stars were distant suns that had their own set of planets as our solar system. The context of imaginations changed. I started imagining earth-like life on some of those planets. Then how the inhabitants of those planets would look like; were they tiny people from “Gulliver’s Travels” or varied creatures from “Alice in Wonderland” or giants as big as eighty times as we or yet people with single eye and eight arms. My questions remained unanswered and fascination of staring stars continued.

Later these stars & constellations became a useful tool to identify directions. Being a member of Bharat Scouts & Guides at school, I was trained how to use constellations to identify Pole Star that always shined in north. If one is lost in an unknown territory, in absence of a compass to identify direction, we can use Pole Star in night to find our way. The Great Bear or Ursa Major constellation helped in identifying Pole Star (Polaris). Start from the last star of the tail of Ursa Major towards the body; three stars of the tail and two of the body form an arch like shape when joined together with lines. Rest two stars of the body are left aside. Join these two standalone stars by a separate straight line. Extend this straight line in the direction of the convex side of arch formed by joining other five stars of constellation. Pole star falls on this extended straight line. The distance between the constellation and Pole Star is approximately five time of the distance between two stars from which straight line originated. To re-verify if Pole Star is rightly identified use The Little Bear or Ursa Minor. Pole Star is the last star of the tail of this constellation. Ursa Minor is replica of Ursa Major, a less brighter one and smaller. Identification of the Pole Star for the first time was a learning experience. I understood it was not the brightest star in the sky. 🙂 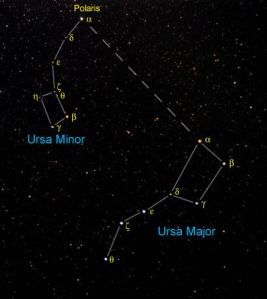 The constellations are on move (rather the Earth is on move). There are times in year The Great Bear can’t be located in the sky. This time starts in beginning of November. In such times identify “Cassiopeia” constellation or “W” star to locate Pole Star. A group of five stars of this constellation forms a structure like “W” alphabet of English, hence this name. Both Vs of “W” have varied angles. Bisect the larger angle with a straight line. This straight line when extended directly reaches Pole Star.

Ah!! this was a happy star gazing time for me. I’m still to try it with a telescope, but watching the starry sky with naked eye has its own charm. Since I left my sleepy town for higher studies and a career; this fun, learning, exploring stopped. It is missed. I wish to catch up on it very next time I’m in a countryside, village or camping on a hilly terrain. The simplicity of this activity can’t be felt in the Planetariums….. an activity spruced and spiced up with grandma’s stories, will be missed by new generation.

Sometimes back I was discussing hobbies and interests with a recent acquaintance and spurt she came up “Gazing Stars”. This one phrase somersaulted me back to my growing up school days in a sleepy town. Putting my emotions at bay, I popped up with a few questions. What was so fascinating about it this activity? Was she able to identify a few stars and constellations? Was this activity just a fun or has some relevance too? She asked me, why was I asking so.

This is an activity best done in a small town, village or countryside where we get an opportunity to explore the sky in quiet darkness of night. Fun, imagination, learning, disaster management are all rolled into one activity. I recalled my childhood days spent in my hometown with frequent power cuts. Inverter yet to come into existence and generators not always available or practical; I got ample occasions to spend on the terrace and courtyard of our huge house.

Staring the starry sky with naked eye is quite a fun. My childhood brain had array of imaginations. At times the dark sky appeared to me as big bowl with stars as pearls scattered in it. Another moment it seemed as if it was God’s house decorated with twinkling lights and there was celebrations going on. He watched and safeguarded us from there. At yet another they were our ancestors who became stars and watched us each day. Still another stars of Saptarishi (The Great Bear or Ursa Major constellation) were seven sages of Hindu mythology transformed to permanency as stars in heaven by God. For me the sky was a synonym of heaven.

“Saptarishi” is formed from two words in Sanskrit; “Sapt” as seven and“Rishi” as sage and hence seven sages. The name of seven sages was told numerous times by my Grandparents. I could never remember all the names then. It was tough for a child’s brain to remember all these names and no exams were conducted on Hindu mythology. They were Attri, Bhardwaj, Gautam, Jamadagni, Kashyap, Vashishth & Vishwamitra. A small star, little less in brightness very close to one of these seven stars was sage Durvasa who was not included initially in the constellation because of his anger. (This is the story as told in my area and can’t be verified through scriptures) He was included as eighth one upon his request to God. Hence it shined less. Another version said, the eighth less shining star was Arundhati, wife of sage Vashishth. She was included in the constellation because of her virtues and was placed close to her husband. Pole Star or Dhruv Tara was Dhruv a little prince son of king Uttanpad. Little Dhruv was thrown out from his father’s lap by his stepmother Suruchi. Dhruv meditated hard to Lord Vishnu. He converted Dhruv to brightest star and gave a permanent lap and thrown in God’s kingdom. I understood that Dhruv tara or Pole star shined brightest in the sky only to realize later my learning was not right.